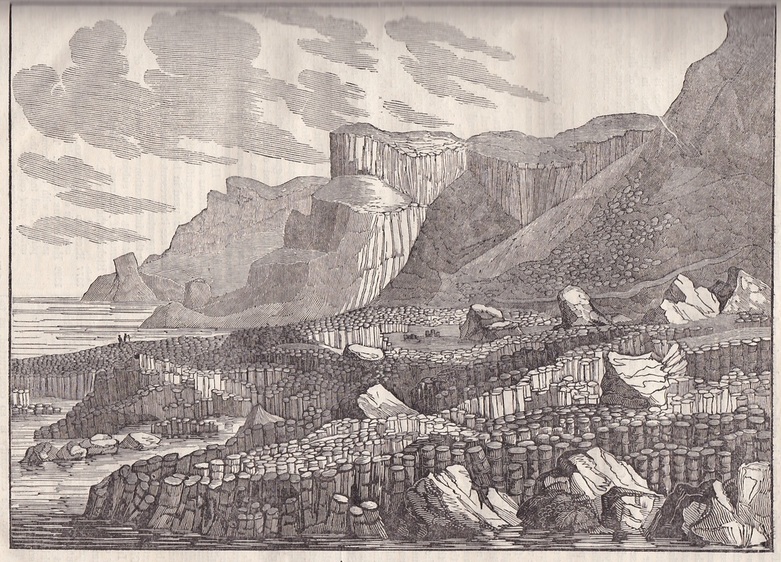 THE GIANTS' CAUSEWAY.
The Giants' Causeway is the name given to a portion of that stupendous range of basaltic columns which extends over a great part of the north-eastern coast of Ireland and the adjacent islands. It is situated within one mile of Bushmills, on the northern coast of the county of Antrim, and consists of a most irregular arrangement of many hundred thousands of columns, most of which are of a pentagonal or five-sided form, and vary from one to five feet in thickness, and from 20 to 250 feet in height.

​The origin of basalt is evidently volcanic, and the prismatic form in which it is found, appears to be the result of its having been melted. The composition of these pillars is well deserving the attention of the observer: they are not of one solid stone, but composed of several short lengths, curiously joined, not with flat surfaces, but like a ball and socket or the joints in the back-bones of fishes, the end of one being hollowed out so as to receive that of another, the depth of the hollow being generally about three or four inches. Although the most common form of these columns, as we have already noticed, is five- sided; many are found with eight, and some with only four sides, but notwithstanding the want of uniformity both of figure and size, and though they are perfectly distinct from top to bottom, yet is the whole arrangement so closely combined at all points, that the thinnest substance can scarcely be introduced between them, either upon the sides or at the angles. The whole mass forms a kind of mole or quay extending from the base of a steep promontory, several hundred feet into the sea.
The hollows on the top of the joints are of use to the neighbouring poor for they employ them in summer as salt-pans, and thus very easily procure for themselves a kind of bay-salt. At high tide, they fill these little basins with sea-water, and the heat of the sun and of the stone, combined with the shallowness of the basin, causes the whole moisture to evaporate in a couple of days.
This peculiar arrangement of basalt is not confined to the coast of Ireland, but is to be met with in many other parts of the world. Fingal's Cave, in the island of Staffa, is formed of gigantic columns of this mineral; Samson's Ribs, rear Edinburgh, affords another instance; and if we look abroad we find Giants’ causeways not uncommon in ltaly,  in the neighbourhood of Padua; in the hills of Auvergne and Velay in France; and in many other parts of the globe.
The colour of basalt is generally of a dark blueish gray, varying, at times, to brown or red; its texture is granular, and, in some cases it is nearly hard enough to strike fire with flint.
The following account of a cave, called Dunkerry Cavern, in the immediate vicinity of the Giants' Causeway, and in fact, a part of the same basaltic formation, will give some idea of the appearance of the basalt, when seen under other circumstances; it is extracted from the Rev. G. N. Wright's Guide to the Giants' Causeway.
" In the dark perpendicular cliff is a deep and lofty cave, accessible by water alone; the entrance assumes the appearance of a pointed arch, and is remarkably regular. The boatmen are very expert in entering these caves; they bring the boat’s head right in front, and, watching the roll of the wave, quickly ship the oars, and sail in majestically upon the smooth rolling wave.
“The depth of Dunkerry Cave has not been ascertained; for the extremity is so constructed, as to render the management of a boat there dangerous; besides, from the greasy character of the sides of the cave, the hand cannot be serviceable in forwarding or retarding the boat. Along the sides is a bordering of marine plants, above the surface of the water, and of considerable depth,
" It has already been frequently observed, that the swell of the sea upon this coast is at all times heavy and as each successive wave rolls into the cave, the person would be apprehensive of a ceaseless increase in the elevation of the waters, until they reached the summit of the cave. Of this, however, there is not the most distant cause of apprehension, the roof being sixty feet above the high water mark. The roaring of the waves in the interior is distinctly heard; but no probable conclusion can be arrived at from this as to the depth. It is said, too, that the inhabitants of some cottages, a mile removed from the shore, have their slumbers frequently interrupted in the winters' nights, by the subterranean sounds of Dunkerry Cavern. The entrance is very striking and grand being twenty-six feet in breadth, and enclosed between two natural walls of dark basalt, and the visitor will enjoy a much more perfect view of the natural architecture at the entrance, by sitting in the prow, with his face to the stern, as the boat returns,"