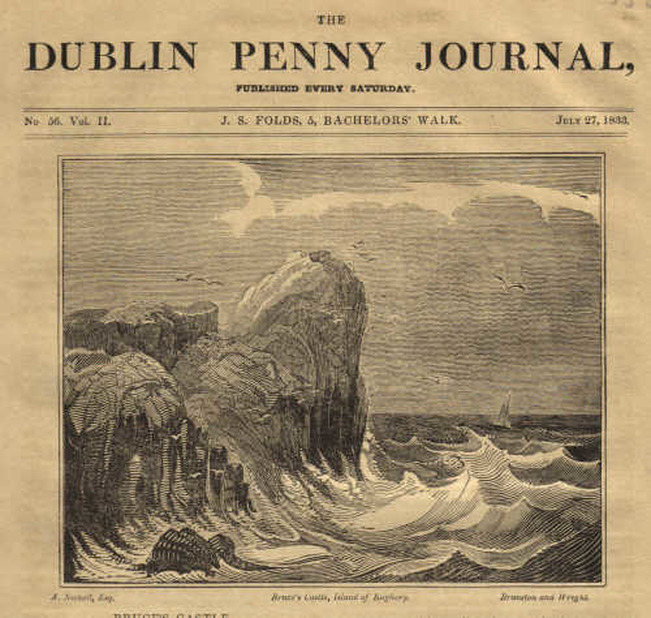 
BRUCE'S CASTLE,
ISLAND OF RAGHERY.
On a precipitous cliff, near the northern angle of the island of Raghery, stand the ruins of an ancient fortress, called Bruce'S Castle, from its having afforded an asylum to that heroic chieftain, when an exile, in the winter of 1306—7. The greater part of this building has fallen down, and the remaining portion is mouldering in the last stage of decay; still even its very fragments are peculiarly interesting, from their presenting the singular fact, that the lime with which the castle is built has been burnt with sea-coal; the cinders are still visible in the mortar, and bear a strong resemblance to those of the Ballycastle coal; thus demonstrating that the use of sea-coal in this kingdom is of greater antiquity than has been imagined.
* According to tradition, this Castle was erected by the Danes, who are said to have exercised the utmost tyranny over the people of Raghery, who at length effected their deliverance in the following manner :—Having to furnish, on demand, straw, fuel, and necessaries, for the use of the garrison in the castle, they contrived to conceal, in each creel, a sturdy native, armed with a skein, or dagger, who, in the following night, despatched the guard, and having admitted their friends from without, put the garrison to the sword, with whom expired the Danish power in Raghery.
At a little distance from the ruin, on the beach, is a natural cavern, with a wall in front, evidently intended for defence, called Bruce's Cave, which oral history states was also used as a place of retreat by the Scottish chieftain ; and it is here worthy of record, that, in the summer of 1797, every male adult in Raghery, except the parish priest and one other gentleman, took the test of an United Irishman, in the gloomy recesses of Bruce's Cavern. Adjoining is a small haven, called Port-na-Sassanach ; and near it, a field of battle is pointed out, called the Englishmen's graves — a pit or hollow remains, where the dead were probably interred in one common grave. This action is believed to have taken place in 1551—2, when an English army, who landed here, were totally defeated by the McDonnells.
Bruce, during his exile here, was accompanied by some of his principal followers, amongst whom was Sir Robert Boyd, Sir James Douglas, and Angus McDonnell, Sixth King of the Isles, sovereign of Raghery, which island was, at this period, accounted part of his dominions. Early in the spring of 1307, Angus returned to "Kyntyre" to circulate a report of the death of Bruce, and also to secretly draw together a body of troops, to act when occasion might require in behalf of his illustrious friend. Soon after, Boyd and Douglas also took leave of Bruce, and departed for Arran ; and effecting their landing in safety, ten days after, they were followed by Bruce, who, receiving, by his spies, favourable intelligence from the main-land, landed at Turnberry, in Carrick, and, with 300 followers, cut to pieces a body of English quartered in that neighbourhood. However, soon after, succours arriving to his enemies, he was obliged to seek shelter in the wilds of Carrick, the patrimonial country of his family. The Rev. Dr, William Hamilton, in his "Letters Concerning the Northern Coast of the County of Antrim," when noticing the exile of Bruce in Raghery, says, "his enemies found him even in this remote spot;" and adds,that "this castle is celebrated for the defence which Bruce made in it." These are strange errors, for which there is not the slightest foundation either in history or tradition ; such an event would have been mentioned by the minute Barbour, in his BRUCE; and Dalrymple informs us in his Annals of Scotland, that, in Raghery, Bruce " eludedthe search of his enemies," to whom his retreat remained unknown.
S. McS.
* Hamilton's Letters Concerning the Northern Coast of
Antrim. A portion of this cement, containing cinders, may
be seen in the, Museum of Trinity College, Dublin.
VOL. II No. 4.