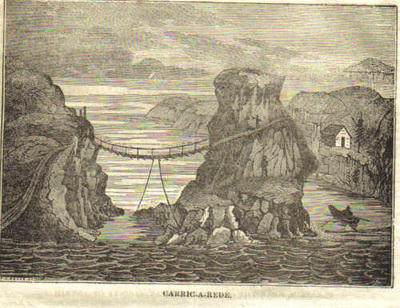 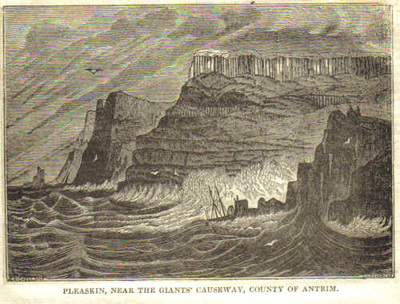 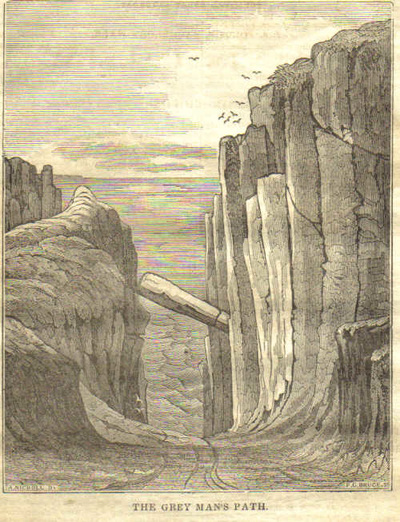 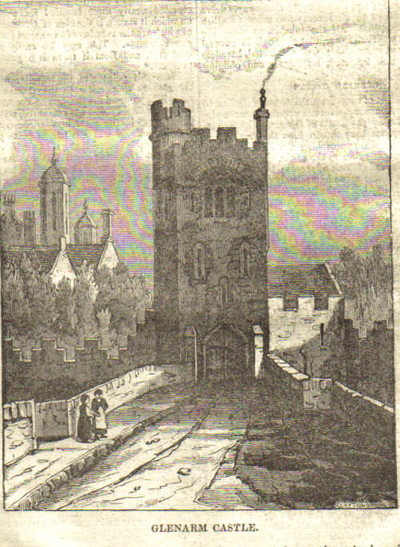 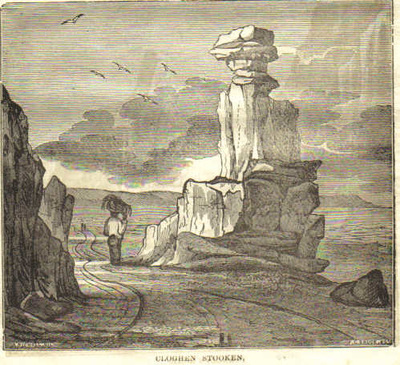 Having in a recent number of our Journal, when describing the beauties of the county of Wicklow, the Dargle, the Waterfall, the Devil's Glen, the Meeting of the Waters, &c., promised in some future Journal to conduct the reader along the Antrim coast — lest any purchaser of the present volume might suppose we had failed in redeeming our pledge, we determined on giving, in a Supplementary Number, with the Title and Index to the Volume, a brief though faithful Guide to the Giants' Causeway, illustrated from accurate sketches, by Nichol, of several of the most striking views to be met with in the route from Belfast to that stupendous and extraordinary work of nature. That nothing can exceed in grandeur and boldness the scenery which occasionally bursts on the view of the traveller along the entire of this line, has been generally admitted by all who have travelled it. The road is hilly in the extreme, but it presents one continued scene of fine, bold, picturesque, maritime landscape ; the rocks in some places rising into precipitous cliffs, jetting headlands, noble promontories, and again, sloping down into beautiful bays and quiet harbours ; the prospect to the right being one continued sea-view, with the Scottish coast, the Isle of Arran, and other lesser islands, in the distance; that to the left pleasingly diversified with hill and valley — here a spot well cultivated, and occupied with comfortable cottages — and this again, succeeded by a barren mountain, with scarcely a cabin, even of the most miserable description, to show that it is inhabited by beings of the human kind — the entire line divided into nearly equal distances, which lie close along the coast, and which may be thus laid down — about ten miles from Belfast is the ancient town of Carrickfergus ; beyond this, about eleven miles, the town of Larne ; twelve three quarters farther on, Glenarm; twelve three quarters more, Cushendall; fifteen and a quarter, Ballycastle; and thence to the Causeway, twelve three quarter miles ; in all seventy-five miles (English measure) from Belfast. Of the inhabitants along the coast it may be sufficient to say, that although in general very superstitious, they are a well conducted, harmless people, rather well informed, intelligent, and obliging to strangers.
GLENARM CASTLE As the entire line of coast from the town of Belfast to the plane of the Causeway, does not present a more picturesque object than the Castle of Glenarm with its surrounding scenery, we have chosen it as the frontispiece for our volume. In approaching the little town or village, which gives its title to the castle, the road will be found very hilly, and difficult of access ; but the summit once gained, the inland scene immediately changes to one of a most interesting kind — the beautiful little village of Glenarm, containing nearly two hundred neat, whitened cottages, appears, romantically situated by the shore, in a deep ravine or sequestered glen, being closed in on either side by lofty hills, and washed by the silver waters of a mountain stream; on the opposite bank of which, in a commanding situation, stands the ancient castle, which for many years was the residence of the Antrim family. In another direction, a finely wooded glen is observed, leading to the little Deer Park, a place of singular construction, and well deserving the attention of the curious traveller. It is bounded at one side by the sea, whose waters have hollowed it into caves and archways — and at the other by a natural wall of solid basalt, rising two hundred feet high, which is as perpendicular and regular as the fortifications of a city, and presents a more impassable barrier than could possibly be raised by the hands of man. From this point there is an exceedingly fine prospect of the coast and surrounding country. — The castle is a stately, ancient pile, still bearing in its appearance something of the character of a baronial castle of the fifteenth century. The approach to it is by a lofty barbican, standing on the northern extremity of the bridge. Passing through this, a long ter¬race, overhanging the river, and confined on the opposite side by a lofty, embattled curtain-wall, leads through an avenue of ancient lime-trees, to the principal front of the building ; the appearance of which, from this approach, is very impressive. Lofty towers, terminated with cupolas and vanes, occupy the angles of the building ; the parapets are crowned with gables, decorated with carved pinnacles, and exhibiting various heraldic ornaments. — The demesne is well wooded, and rather extensive. In the cemetery connected with the church are the ruins of an ancient monastery of Franciscan friars ; but they are not of such a description as to afford matter for investigation to any traveller.

ANECDOTES OF PERSON'S FALLING FROM THE CLIFFS.
The guides relate several interesting stories of individuals, who fell from the heights in this neighbourhood. — From the Aird Snout, a man named J. Kane tumbled down while engaged in searching for fossil-coal, during a severe winter — and, strange to say, was taken up alive, although seriously injured by the fall. Another man, named Adam Morning, when descending a giddy path that leads to the foot of Port-na-Spania, with his wife's breakfast, who was at the time employed in making kelp, missed his footing, and tumbling headlong, was dashed to atoms ere he reached the bottom. The poor woman witnessed the misfortune from a distance ; but supposing, from the kind of coat he wore, that it had been one of the sheep that had been grazing on the headland, she went to examine it, when she found instead, the mangled corpse of her husband. Another story is told of a poor girl, who, being betrothed to one she loved, in order to furnish herself and her intended husband with some of the little comforts of life, procured employment on the shore, in the manufacture alluded to, with some other persons in the neighbourhood. Port-na-Spania, as will be observed, is completely surrounded by a tremendous precipice, from three to four hundred feet high, and is only accessible by a narrow pathway, by far the most difficult and dangerous of any of those nearly perpendicular ascents to be met with along the entire coast. — Up this frightful footway was this poor girl, in common with all who were engaged in the same manufacture, obliged to climb, heavily laden with a burden of the kelp ; and having gained the steepest point of the peak, was just about to place her foot on the summit, when, in consequence of the load on her shoulders shifting a little to one side, she lost her balance, fell backwards, and ere she reached the bottom, was a lifeless and a mangled corpse. To behold women and children toiling up this dreadful ascent, bearing heavy loads, either on their heads or fastened from their necks and shoulders, is really painful, even to the least sensitive, unaccustomed to the sight — and yet the natives themselves appear to think no¬thing whatever of it.
An anecdote is also related of a man who was in the habit of seating himself on the edge of a cliff which overhung its base, at Poortmoor, to enjoy the beauty of the widely extended scene. One fine summer morning, however, having gained the height, and taken his accustomed seat, while indulging in the thoughts and feelings which we may suppose the scene and situation likely to inspire, " a change came o'er the spirit of his dream," — the rock upon which he was perched gave way, and, in the twinkling of an eye, bore him on " its rapid wing" to the foot of a precipice, where it sunk several feet into the earth — safely depositing its ambitious bestrider on the shore, at a distance of fully four hundred feet from the towering eminence off which he had made his involuntary aerial descent.

PLEASKIN.
Towards the head-land of Bengore, the tourist may now proceed, following the windings of the cliffs, and examining in succession the various capes and bays into which the great promontory is broken. While the appearance of this entire line, from port Noffer to Bengore-head, must be admitted to be grand in the extreme, the promontory of Pleaskin will be found more particularly deserving of minute attention. It is a continuation of the headland of Bengore ; and is beyond doubt the prettiest thing in nature, in the way of a promontory. It appears as though it had been painted for effect, in various shades of green, vermillion rock, red ochre, grey lichens, &c. — its general form so beautiful — its storied pillars, tier over tier, so architecturally graceful — its curious and varied stratifications supporting the columnar ranges — here the dark brown amorphous basalt — there the red ochre, and below that again the slender but distinct lines of wood-coal — all the edges of its different stratifications tastefully varied by the hand of vegetable nature, with grasses and ferns, and rock-plants ; — in the various strata of which it is composed, sublimity and beauty having been blended together in the most extraordinary manner.

BENGORE HEAD. Bengore, or the Goat's Promontory, which rises three hundred and thirty feet above the water, is the extreme headland ; but there is nothing in the scenery by which it is surrounded particularly worthy of observation, with the exception of a curious stratum of fossil-coal, which is found lying between two ranges of basaltic pillars — and the exceedingly fine view which meets the eye from its summit in the direction of Fairhead, Rathlin, &c.

DUNLUCE CASTLE.
Having viewed every thing worthy of notice in the immediate direction of the Causeway, the traveller may proceed towards Dunluce Castle, on his route to Coleraine. The Castle, which our readers will find described in a former number of our Journal, is one of the finest ruins to be met with in Ireland, and possesses very considerable interest, as having been connected with several important events in the history of the country.

* “Oral history states, that “in olden time” all the rents of Ireland were paid at this place, and that the last Danish invaders embarked from here”

*** From our limited space the directions and descriptions we have given of this interesting line of coast have necessarily been very concise ; we would, therefore, refer the traveller who may wish for further information, to “The Northern Tourist," published by Messrs. Curry, and Co. and from which (although the copyright is now altogether their own,) they have kindly permitted us to make such extracts as suited our purpose. " The Guide to the Causeway," which they have just published, we would particularly recommend to the notice of persons travelling in the north of Ireland, as affording a correct picture of that extraordinary work of nature. Having now conducted the reader along the most interesting portions of the Antrim coast, pointing out in our way whatever we considered might interest or amuse, we take our leave, in the hope of again meeting him in the course of the ensuing year, in some other interesting portions of our country heretofore undescribed.