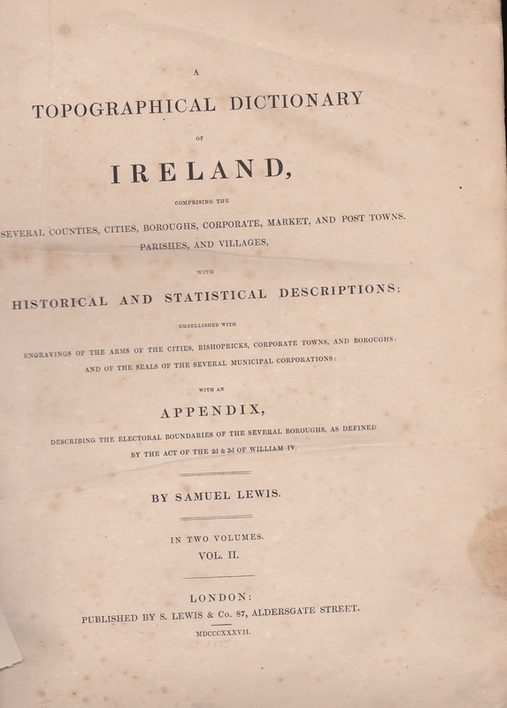 ARMOY, or ARDMOY, a parish, partly in the barony of UPPER DUNLUCE, but chiefly in that of CAREY, county of ANTRIM, and province of ULSTER, 4 miles (S. S. W.) from Ballycastle; containing 2622 inhabitants, of which number, 129 are in the village. St. Patrick is said to have had a cell at this place, where, in attempting to convert the natives to Christianity, his disciple Uhda was killed. The parish is situated on the river Bush, and is intersected by a small river called the Wellwater, which rises in a bog on the eastern side, and, with its tributary streams, flows through the parish into the river Bush on the western side. The road from Ballycastle to .Ballymena passes through it, and is intersected by one from east to west, and by another from north-east to south-west. It comprises, according to the Ordnance survey, 9349 statute acres, of which 826 3/4 are in Upper Dunluce and 8522 1/4 in Carey; about seven-tenths are arable, pasture, and meadow land. The surface is broken by a ridge of mountains which take their names from the townlands to which they are contiguous, and of which the north side affords good pasturage for cattle, and the summits are heathy and barren; about nine-tenths of the great hill of Knocklayd, the highest in the county, is good arable and pasture land. That portion of the parish which is under tillage is in a very high state of cultivation; the system of agriculture is rapidly improving, and composts of lime and earth, or moss, are used as manure for potatoes, by which the produce is greatly increased. There are three bogs, called respectively Ballyhenver, Breen, and Belaney, and the small bog of Moninacloygh; and turf may be had on the sides and summits of all the mountains. Several quarries of excellent white limestone and basalt afford good materials for building, and for repairing the roads. Turnarobert is the residence of the Rev. S. Hunter. The whole of the parish, with the exception of the townlands of Ballycanver, Park, Bunshanloney, and Mulaghduff, and part of the village of Armoy, belongs to the see of Connor. The village is very flourishing and has a penny post to Ballycastle: several handsome houses have been built, new roads have been opened, and bridges constructed over the river Wellwater. Fairs for horses, horned cattle, pigs, corn, and butter, are held on Jan. 25th, Feb. 25th, March 29th, May 25th, Aug. 16th, Nov. 14th, and Dec. 26th. The living was formerly a vicarage, the rectory being appropriate to the archdeaconry of Connor, from the year 1609 till 1831, when, upon the decease of Dr. Trail, the last archdeacon, it became a rectory under the provisions of Bishop Mant's act; it is in the diocese of Connor, and in the patronage of the Bishop; the tithes amount to £225. The church, situated in the centre of the parish, was rebuilt in 1820, for which a loan of £415 was obtained from the late Board of First Fruits: it is a neat plain edifice, and has been lately repaired by a grant of £128 from the Ecclesiastical Commissioners. The glebe-house was built in 1807, at an expense of £376. 10. 4.: the glebe comprises 23 acres, valued at £30 per annum. In the R. C. divisions this parish is united with that of Ballintoy, in each of which there is a chapel: that in Armoy is a small edifice. There is also a place of worship for Presbyterians in connection with the Synod of Ulster, of the third class. The parochial school is in the townland of Doonan; there are national schools at Breene and in the village of Armoy, and another school at Mulaghduff. In the churchyard are the remains of an ancient round tower, 47 1/2 feet in circumference and 36 feet high; the present rector has enclosed the upper part with a dome of wood and stone, in which is placed the church bell. Some beautifully clear crystals, called Irish Diamonds, are found on Knocklayd; and fragments of gneiss, porphyry and mica slate are found in various parts of the parish.