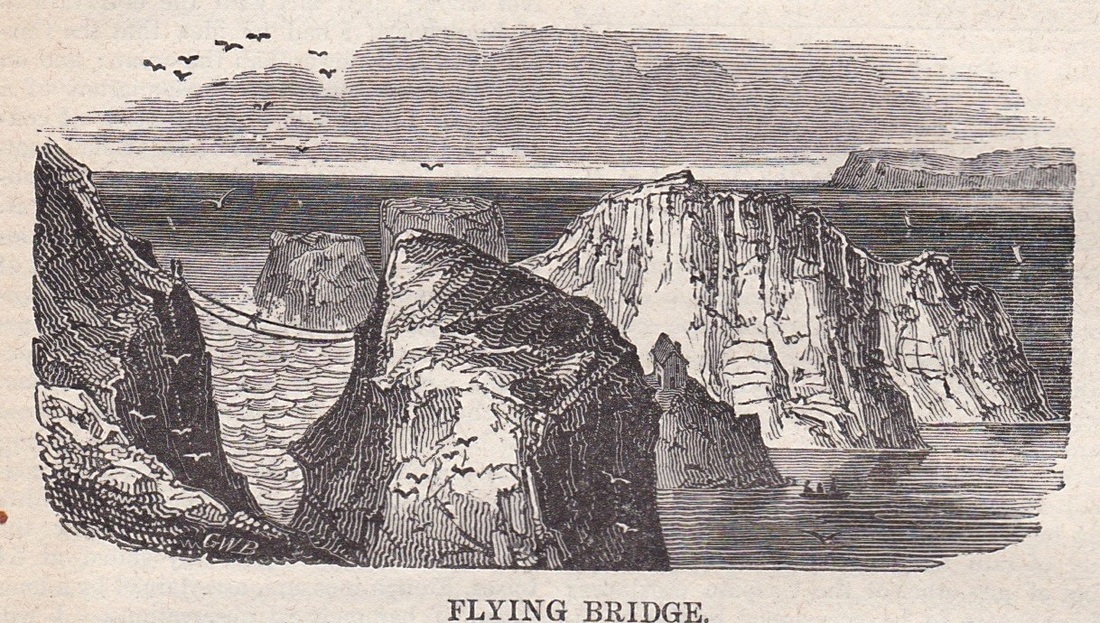 The cut represents a portion of the coast of Antrim, at the northern extremity of Ireland. This romantic spot is called Carrick-a-Rede, or Carrick-a-Ramhad, i. e. the rock in the road; because it interrupts the salmon in their passage along the coast. It consists of an insulated crag of rudely prismatic basalt, connected with the main land by a bridge of ropes, thrown across a chasm sixty feet in breadth, and eighty-four in depth.
Its contrivance is as follows:-
Two strong cables, parallel to each other, are fastened to rings, inserted in the solid rock, on each side of the chasm, and the narrow interval of the ropes is occupied by a boarded path-way. The danger in crossing is attributable to an irregularity in planting the foot upon the board, which of course recoils against the impression too soon, and precipitates the unguarded and courageous venturer into the deep chasm below. Persons accustomed to walk along planks may safely venture over, and the women and boys attached to the fishery, carry great loads across with the utmost contempt of danger, and apparent ease. This dangerous mode of communication exists for only part of the year, viz. during the fishing season; immediately after which it is removed, but restored again the ensuing season. It should be remarked, that the Island of Carrick-a-Rede is of nearly equal elevation with the main land, 350 feet. In the cliffs, near the island, is a very beautiful cave, about thirty feet in height, formed entirely of columnar basalt, of which the bases appear to have been removed, so that the unsupported polygonal columns compose the cave.
The chief use of this insulated rock appears to be that of interrupting the salmon, who annually coast along the shore in search of rivers, in which to deposit their spawn. Their passage is generally made close to the shore, so that Carrick-a-Rede is very opportunely situated for projecting the interrupting nets. It will here be inquired, why the fishermen do not spare themselves the trouble of throwing across this very dangerous bridge, and approach the island by water; but this is perfectly impracticable, owing to the extreme perpendicularity of the basaltic cliffs on every side, except in-one small bay, which is not accessible but at particular periods. This fishery, and indeed all those along the northern coast are very productive. The only residents in the little cottage on the island are the clerk and fishermen, and they remain only during the summer months. The fishermen are paid, and all the expenses of fishing defrayed, by proportionate allowances of salmon.
We are indebted for these details to the clever Guide to the Giant's Causeway, by the Rev. G. N. Wright, A.M.; the illustrations to which are executed in a superior style by Mr. G. Cooke.