BALLYCASTLE, on the north coast of County Antrim, Northern Ireland, is a prosperous little market town with a large summer tourist population. Prior to 1880 the nearest railway station was 16 miles away at Ballymoney, on the then Belfast and Northern Counties Railway main line between Belfast and Londonderry. The Ballycastle Railway was incorporated on 22nd July 1878, the line was opened on 18th October 1880 and, in common with other Irish narrow-gauge lines, a gauge of 3 ft. was adopted. At the time, the construction of the electric tramway from Portrush to Bushmills, described in the "M.M." of April 1950, was projected and it was then intended to connect it with the Ballycastle line by a light railway between Bushmills and Dervock. This connection was never built and the Ballycastle railway system remained unconnected with any of the other 3 ft. gauge lines in County Antrim.

From 1880 to 1924 the Ballycastle Railway was operated independently. Some five years after the end of World War I the company's finances were in a very unsatisfactory state, and on 8th February 1924 an extraordinary general meeting was held to consider the closing of the line; this took place on 4th April 1924. After a four months' interregnum the line came to life again, though no longer as a separate concern. Operation was taken over by the N.C.C. section of the L.M.S., the latter having assumed, on grouping, the interests of the former Midland Railway, which in 1903 had taken over, the old Belfast and Northern Counties lines, both standard gauge and narrow gauge. To quote from a circular from the Manager's Office, the Ballycastle line was "re-opened on Monday 11th August, 1924, for Passenger, Parcels, Goods, Mineral and Live Stock Traffic." Dervock and Armoy were "to be worked as attended halts, and Stranocum, Gracehill and Capecastle unattended:"
​
From this time the history of the line, especially as regards locomotives and rolling stock, became interconnected with the other narrow-gauge lines then under N.C.C. control. These were respectively the line from Ballymena to Parkmore and Retreat, originally the Ballymena, Cushendall and Red Bay Railway, the first narrow-gauge railway in Ireland; and the old Ballymena and Larne Railway line. The fortunes of both these lines were declining and passenger working on them ceased in the early 1930s. The Ballycastle line continued to operate, but competition from road transport became progressively more acute until finally, five years after the end of World War II, the line closed for the second and very probably the last time. As to locomotives, the Ballycastle Railway used five. Three of these were 0-6-0 saddle tanks, built by Black, Hawthorn and Co. in 1879 and named respectively, "Dalriada," "Countess of Antrim" and "Lady Boyd." In 1908 the company purchased two massive 4-4-2 side tank engines, Kitson-built in Leeds, which were numbered 3 and 4, one of them immediately replacing "Lady Boyd." On the re-opening of the line by the N.C.C. in 1924, the two remaining old saddle tanks followed "Lady Boyd" to the scrap heap; and the two Kitson 4-4-2 side tanks, renumbered 113 and 114, were transferred to the Larne road for the boat expresses. Engines in use on other parts of the N.C.C. system then made their appearance on the Ballycastle line. Among them were the Beyer-Peacock 0-6-0 side tanks Nos. 106 and 108, graceful high-domed outside-cylinder engines which had been built in 1887 for the Ballymena and Larne Railway. 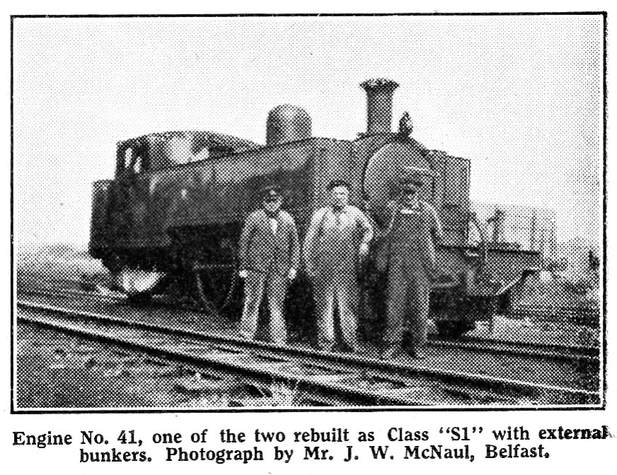 A more interesting class of engine, some of which were transferred to the Ballycastle line, had been designed by Mr. Malcolm of the old Belfast and Northern Counties Railway. These were the class "S" 2-4-2 two-cylinder compound tanks, which had the outside high-pressure cylinder on the left and the outside low-pressure cylinder on the right-hand side of the engine. Six of these were built initially for use between Ballymena and Larne, at various dates from 1892 to 1920. As designed they had very little bunker capacity, with only a small amount of coal carried on each side of the fire-box aft of the water tanks. Some engines were rebuilt to Classes "Sl" and "S2." Thus Nos. 101 and 102 were given rear bunkers, becoming class "S1" in 1930 and 1928, and they were renumbered 41 and 42 in 1939-40. In this form No. 41 worked the Ballycastle line „i until its close, while in recent years No. 42 handled occasional goods trains on the remaining Larne-Ballyclare portion of the old Ballymena and Larne Railway.

One of the 1892-built compounds, originally No. 69, was renumbered 110 in 1899 and was extensively rebuilt to Class "S2" in 1931. In this form it had a larger boiler, a rear bunker, and a rear bogie in place of the pony truck, this giving it the unique wheel arrangement of 2-4-4. This engine ran for a time on the Ballycastle road, but later worked the Larne-Ballyclare line.

During its last four years, the Ballycastle line was worked by two locomotives of Class "S," Nos. 43 and 44, and No. 41 of Class "Sl," on the principle of one engine in steam, except when occasional banking was required out of Ballycastle, or on Lammas Fair Day. One or two incidents mark the last chapters of the story. In January 1943, a train of two carriages, 10 wagons and a brake van, headed by No. 41 got out of control at the head of the 1 in 60/50 bank between Capecastle and Ballycastle. A 15 m.p.h. slack round the curves at Ballylig was swung through in gay abandon at more than twice the limit, and an estimated speed of 61 m.p.h. was reached on the long downhill straight beyond. A curve over a stone-built viaduct entering Ballycastle was fortunately negotiated safely, but the engine clambered over the solitary buffer stop at the terminus, crossed the road and ended bunker-down in a stream. The sole casualty was the fireman, who jumped for it on the way through the terminus and sprained his ankle; but Driver McKissick was reported as unwilling to undergo such an experience again!​ 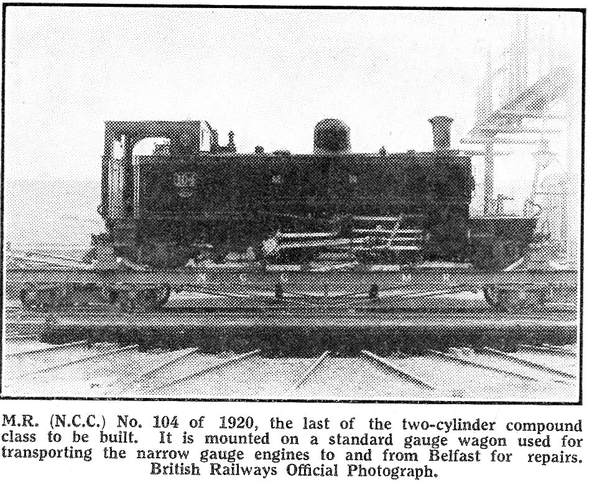 A less spectacular exit from the wrong end of Ballycastle station was provided by No. 44 on a snowy day in January 1949, when the buffer stop was again demolished and the guy-rope of a telegraph pole near by stretched tight as a banjo string. On 12th March 1947 the last train out of Ballycastle had to fight its way through a severe snowstorm, and at mile-post I 1 engine No. 41 plunged its boiler into a deep drift which blocked a cutting. The passengers spent the night in the train, most of the time without steam heating when the limited coal and water supply was exhausted, and after a rescue party had dug them out, reached their point of departure a day after leaving it.
The writer was fortunate to be on holiday near Ballycastle during the last week of life of the line and made two footplate trips on No. 44. Compared with a main-line engine, the cab was far from roomy, but nevertheless he was made very welcome by Driver Barry Limerick and Fireman Jack Duff. On one journey two passengers were in the cab and conditions, became decidedly congested, for not only was there twice the normal population on board but a quarter-ton of coal occupied much of the floor space. With curtains across to keep out a drizzle of rain, and a trickle of steam from the injector, photography had to be temporarily abandoned.

Much of the line was across flat, high-level peat bogs, and the distant views of the blue hills of Antrim and the reek of turf smoke from the whitewashed farms left impressions that no camera could capture. Permanent way upkeep had been cut to the minimum and many of the sleepers under the flat-bottomed rails were rotting and breaking away. As a result, a large yellow and black notice near Stranocum warned us to "Reduce Speed to 5 miles per hour" for over a mile, and with this long slack and two others of 15 m.p.h. the 16 1/4 mile run took 50 minutes. The boiler pressure fluctuated between 130 and 160 lb., but with a generous time allowance only the ascent of the Capecastle bank called for steady work by Jack Duff.

During the last week, each day saw the line sinking fast. Metal posters were taken down and consigned to Belfast, and lamps, sign boards, waiting room furniture and luggage trucks. were labelled as for an auction. A chance visit to one halt found the porter preparing for a bonfire of accumulated papers, and two working timetables, dated 1933 and 1934 respectively, were triumphantly salvaged. The former showed the daily 2 p.m. goods ex Ballymena and Larne, but by 1934 the ominous "Goods trains run on this line as Traffic demands" covered both these routes, though over the year traffic on the Ballycastle railway had increased from two to five passenger trains each way on week-days. On Sunday evening 2nd July 1950 the last train ran from Ballycastle to Ballymoney. For the occasion, No. 44 with Driver Limerick was piloted by No. 41 with Driver McKissick, both locomotives looking very smart in their new black Ulster Transport livery, the leading engine bravely decorated with paper streamers and flags. Four carriages and two brake vans made up the train and Ballymoney was reached at 7.20 p.m. The last passenger working over the line left Ballymoney at 8.50 p.m.​ 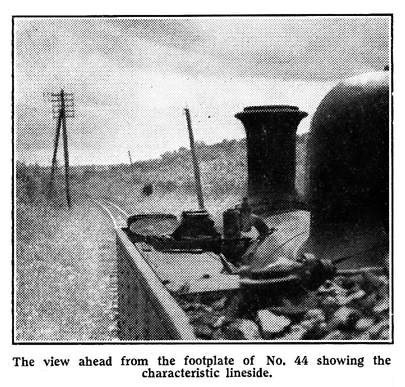