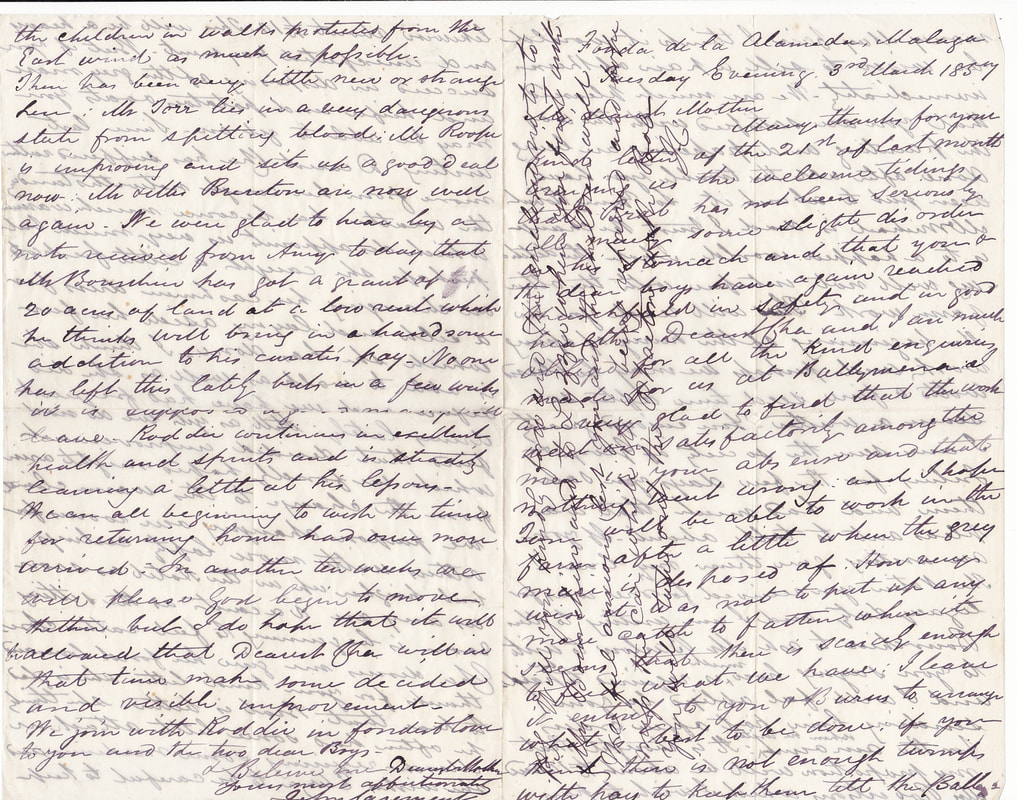 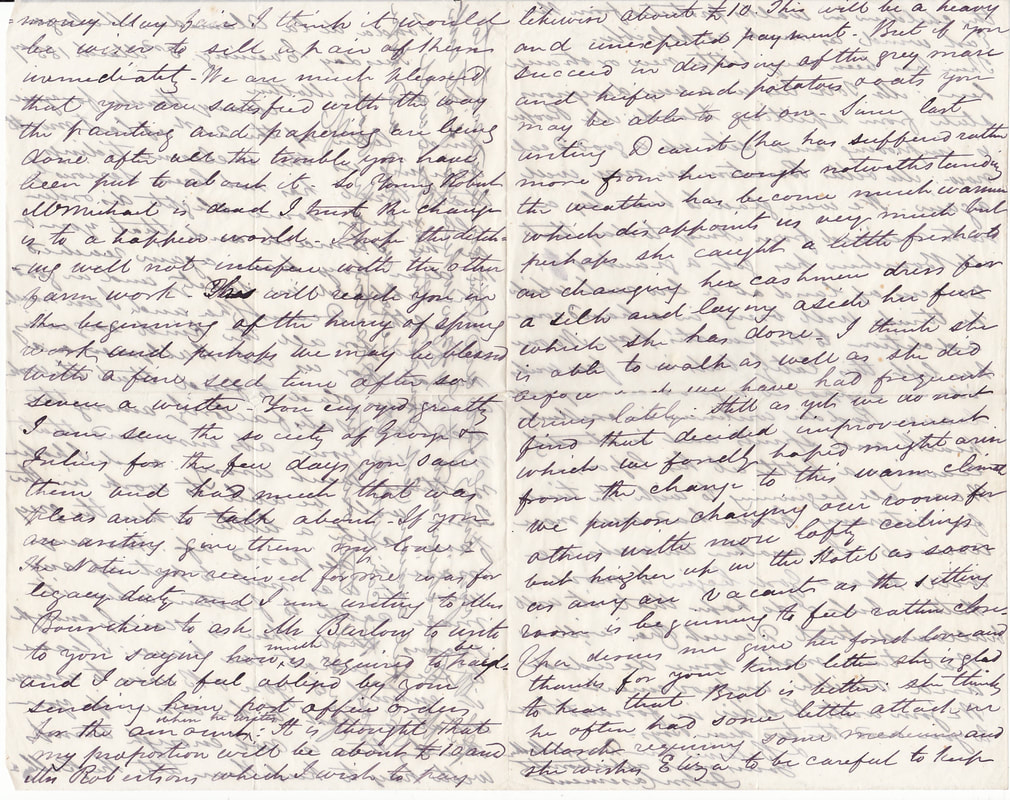 Many thanks for you kind letter of the 21st of last month bringing us the welcome tidings that Brab has not been seriously ill merely some slight disorder of his stomach and that you & the dear boys have again reached Churchfield in safety and in good health. Dearest Cha’ and I are much obliged for all the kind enquiries made for us at Ballymena. I am very glad to find that the work went on satisfactorily among the men in your absence and that nothing went wrong; and I hope that Tom will be able to work in the farm after a little when the gray mare is disposed of. How very wise it was to not put up any more cattle to fatten when it seems that there is scarcely enough to feed what we have. I leave it entirely to you & Burns to arrange what is best to be done; if you think there is not enough turnips with hay till the Ballymoney May fair I think it would be wise to sell a pair of them immediately. We are much pleased that you are satisfied with the way the painting and papering are being done after all the trouble you have been put to about it. So young Robert McMichael is dead. I trust the change is to a happier world. I hope the ditching will not interfere with the other farm work. This will reach you in the beginning of the hurry of spring work and perhaps we may be blessed with a fine seed time after so severe a winter. You enjoyed greatly I am sure the society of George & Julius the few days you saw them and had much that was pleasant to talk about. If you are writing give them my love. The Notice you received for me was for legacy duty and I am writing to Messrs. Bourchin to ask Mr. Barlow to write to you saying how much is required to be paid and I will feel obliged by you sending him post office orders for the amount when he writes. It is thought that my proportion will be about £10 and Mr. Robertson’s which I wish to pay likewise about £10. This will be a heavy and unexpected payment. But if you succeed in disposing of the gray mare and heifer and potatoes & oats you may be able to get on. Since last writing Dearest Cha’ has suffered rather more from her cough notwithstanding the weather has become much warmer which disappoints us very much but perhaps she caught a little fresh cold on changing her cashmere dress for a silk and laying aside her fur which she has done. I think she is able to walk as well as she did before and we have had frequent drives recently; still as yet we do not find that decided improvement which we fondly hoped might arise from the change to this warm climate. We purpose changing our rooms for others with more lofty ceilings but higher up in the Hotel as soon as any are vacant as the sitting room is beginning to feel rather close. Cha’ desires me give her fondest love and thanks for your kind letter. She is glad to hear that Brab is better. She thinks he often had some little attack in March requiring some medicine and she wishes Eliza to be careful to keep the children in walks protected from the East wind as much as possible. There has been very little new otr strange here; Mr. Torr lies in a very dangerous state from spitting blood; Mr. Roo??? Is improving and sits up a good deal now; Mr. & Mrs. Burton are now well again. We were glad to hear by a note received from Amy today that Mr. Bourchin has got a grant of 20 acres of land at a low rent which he thinks will bring in a handsome addition to his curates’ pay. No one has left this recently but in a few weeks it is supoposed a good many will leave. Roddie continues in excellent health and spirits and is steadily learning a little at his lessons. We are all beginning to wish the time for returning home had once more arrived: In another ten weeks we will please God begin to move thither, but I do hope that it will be allowed that Dearest Cha’ will in that time make some decided and visible improvement.. We join Roddie in fondest love to you and the two dear boys.

Believe me Dearest Mother
Yours most affectionately

p.s. Will you kindly forward the enclosed note to Mrs. Bourchin and to Lyzzie when you first write. We feel anxious lest you and the children will miss the car while it is being repaired and hope you will take out the Phaeton with Bob.