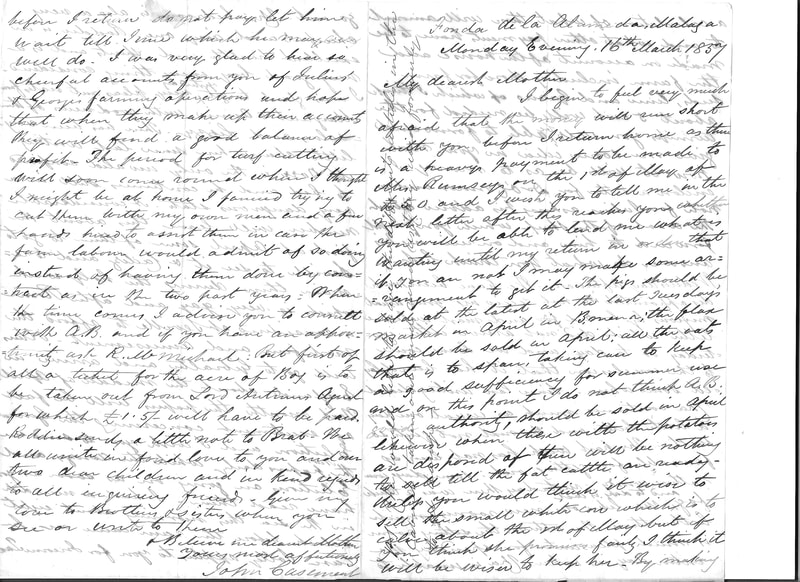 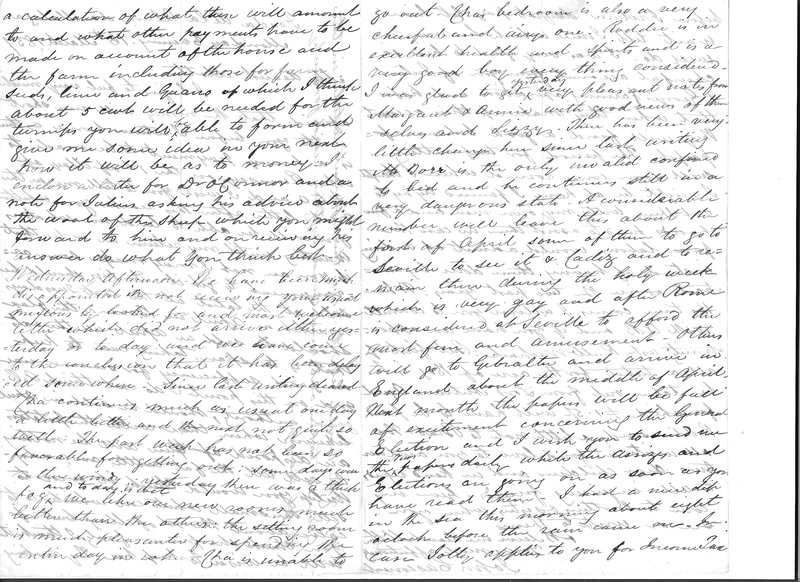 My dearest Mother,
​
I begin to feel very much afraid that the money will run short with you before I return home as there is a heavy payment to be made to Mrs. Ramsey on 1st May of £50 and 1 wish you to tell me in the next letter after this reaches you whether you will be able to lend me what is wanting until my return in order that if you can not I may make some arrangement to get it. The pigs should be sold at the latest at the last Tuesday’s market in April in B’mena; the flax should be sold in April; all the oats that is to spare, taking care to keep as good sufficiency for summer use, and on this point 1 do not think A.B. good authority, should be sold in April likewise. When these with the potatoes are disposed of there will be nothing to sell till the fat cattle are ready, unless you would think it wise to sell the small white cow which is to calve about the 1st of May, but if you think she promises fairly I think it will be wise to keep her. By making a calculation of what then will amount to and what other payments have to be made on account of the house and the farm including those for farm seeds, lime and______ of which I think about 5 cwt. Will be needed for the turnips. You will be able to form and give me some idea in your next how it will be as to money. I enclose a letter for Dr. O’Connor and a note for Julius asking his advice about the wool of the sheep which you might forward to him and on receiving his answer do what you think best.
Wednesday afternoon. We have been much disappointed in not receiving your usual anxiously looked for and most welcome letter which did not arrive either yesterday or today and we have come to the conclusion that it has been delayed somewhere. Since last writing dearest Cha’ continues much as usual, one day a little better and the next not quite so well. The past week has not been so favourable for getting out; some days were rather windy; yesterday there was a thick fog and today is wet. We like our new rooms much better than the others; the sitting room is much pleasanter for spending the entire day in when Cha’ is unable to go out. Cha’s bedroom is also a very cheerful and airy one. Roddie is in excellent health and spirits and is a very good boy everything considered.. I was glad to get yesterday very pleasant notes from Margaret & Annie with good news of themselves and Lizzy. There has been very little change here since last writing. Mr. Dorr is the only invalid confined to bed and he continues still in a very dangerous state. A considerable number will leave this about the first of April, some of them to go to Seville to see it & Cadiz and to remain there during the holy week which is very gay and after Rome is considered at Seville to afford the most fun and amusement. Others will go to Gibraltar and arrive in England about the middle of April. Next month the papers will be full of excitement concerning the General Election and I wish you to send me the newspapers daily while the assizes and Election are going on as soon as you have read them. I had a nice dip in the sea this morning about eight o’clock before the rain came on. In case Jolly applies to you for Income Tax before I return do not pay. Let him wait till I come which he may very well do. I was very glad to hear so cheerful accounts from you of Julius’ & George’s farming operations and hope that when they make up the accounts they will find a good balance of profit. The period for turf cutting will soon come around. When I thought I might be at home 1 fancied trying to cut them with my own men and a few and a few hands hired to assist them in case the farm labourer would admit of so doing instead of having them done by contract as in the two past years. When the time comes I advise you to consult with A.B. and if you have an opportunity ask R. McMichael; But first of all a ticket for the acre of bog is to to be taken out from Lord Antrim’s Agent for which £1 5/- will have to be paid. Roddie sends a little note to Brab. We all unite in fond love to you and our two dear children and in kind regards to all inquiring friends. Give my love to brothers & sisters when you see or write to them.