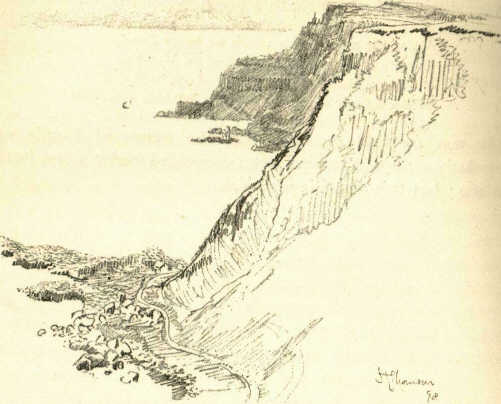 Causeway and the Giant's Chimney Tops.

Highways & Byways in Donegal and Antrim

by Stephen Gwynn with illustrations by Hugh Thompson 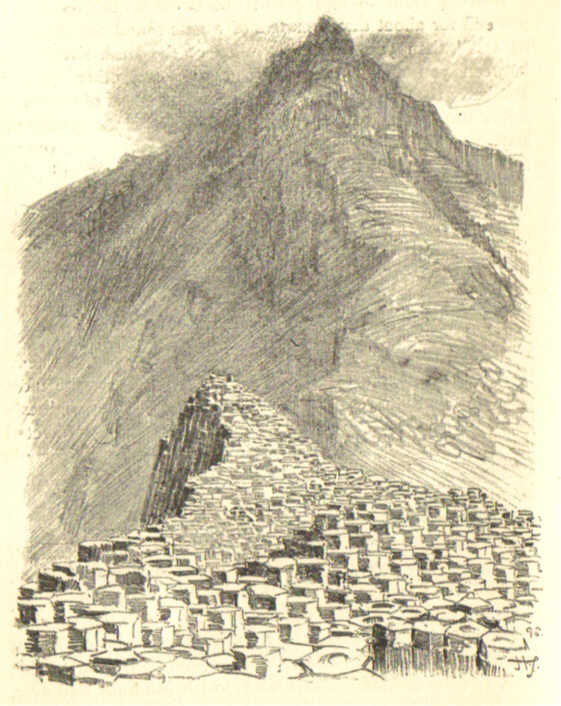 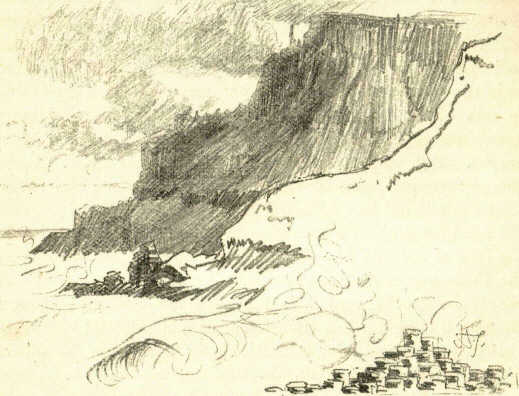 The Giant's Chimney Tops
Leaving Dunluce and getting back on to the road, you proceed for about three-quarters of a mile round the shoulder of a hill, then you open the valley of the Bush river, lying between you and Runkerry Point. On the other side of Runkerry is the Causeway. Your simplest plan is of course to follow the main road past Bushmills (where is the generating station of the electric railway), altogether a fairly level run of four miles. But this road takes you inland by a considerable detour, and there is a much prettier way by the sea, which I recommend if the tide happens to be low. Just where you round the hill a steepish road runs to the left to the little village of Port Ballintrae, a coastguard station and watering place. Ride through the town keeping close to the sea, and the road will take you to the end of a new terrace : beyond that you have to contend with nature. Lift your machine over a stile and you are on a hillside of short grassy turf with a foot-track well marked across it; this you can ride for the most part, and admire on the far side of the bay Lord Macnaghten's huge house, Runkerry Castle, standing bare and unprotected on the seaward slope. But it must not engage your whole attention or you may break the back of your machine. After about a quarter of a mile on the grass you come to another stile, and beyond it is the river Bush, flowing out into the sandy bay. About a hundred yards up to your right is a footbridge over the quiet, but pretty river, which winds sluggishly through sand-hills. I regret to say that in this river salmon are generally caught with the worm. Having got to the far side, wheel your machine along the river bank to the beach, and at low tide you will get a mile or more of fine hard sand to ride over. At the far side is a cart track, which you must lead over, and it will take you up to the road near the Causeway station and hotels. That was the plan which I had laid out for myself, but, the tide being in, I was reduced to riding my machine through the sand-hills, and it is a practice that I cannot recommend. But, under favourable conditions, it is a sporting way of doing the journey, and should be tried by every lover of leisurely short cuts.
At the Causeway you will find two monstrous, ugly hotels, which, being on the landward slope, do not affect the scenery; and you had best put up at one of these if you have come from Coleraine and seen Dunluce. The Causeway should be seen by boat and by land also ; but especially by boat. A guide is inevitable, and he is also necessary to keep at arm's length the people who want to sell things. The guides are licensed, and have a printed tariff of charges : for a matter of three shillings you can get the most amazing deal of patter. For my own part, I decline to compete with their eloquence. You will have to hear a minute description of the Causeway, so why read one? Even geological theories you can get from them much better than from me. All I have to say is, that if one had discovered the Causeway somewhere in the South Pacific or in the neighbourhood of Iceland, one would have something to talk of for the rest of one's life : but as it is, everybody knows photographs of the place, and it is just like the photographs. But, when all is said, it is a very queer freak. From the picturesque point of view the best things are the caves, long tunnels not less beautiful than that under Dunluce, and the great amphitheatre bay, with the basalt columns showing in the face of the cliff like organ pipes. But for picturesqueness the Causeway cannot compare with Dunluce, with its view of the White Rocks, and it is tourist-ridden with a vengeance. Besides, a company has enclosed it with a railing, and makes visitors pay sixpence for admission — an innovation started on Easter Monday of this year, which every good Irishman resents.
If you are staying at the hotel, you should by all means walk round the cliffs which fringe the amphitheatre. Passing Seagull Island you come upon what is called Port-na-Spania (Spaniards' Bay), where the Gerona under Don Alonzo de Leyva, was lost, as I have narrated in a note on the Armada. The guides will tell you that this vessel ran in and fired at a castellated projection of the rock called The Chimney — this basalt takes semblance of architecture in the most surprising way — mistaking it for Dunluce Castle. The Spaniards may have fired guns as signals for a pilot or for relief, but they certainly would have no intention of attacking any fort — their one purpose being to get away.
Pleaskin Head, the highest of these points, attains 400 feet, and from it you have the view of the Donegal coast line to the west and the Scotch to the east. Mr. Cooke, in Murray, says it is the finest thing in the North of Ireland. I cannot agree with him, but it is a fine view. 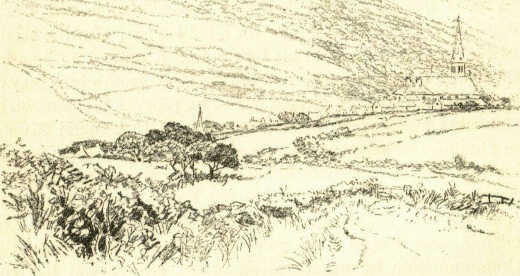 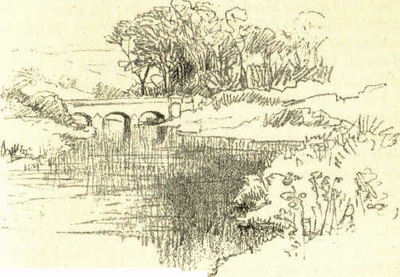 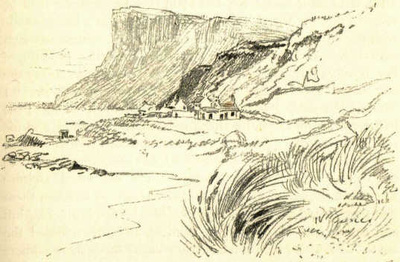 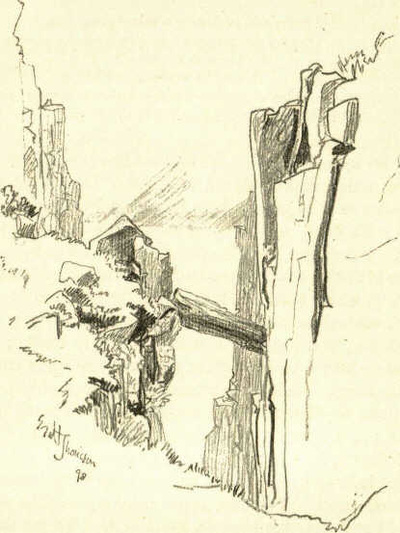 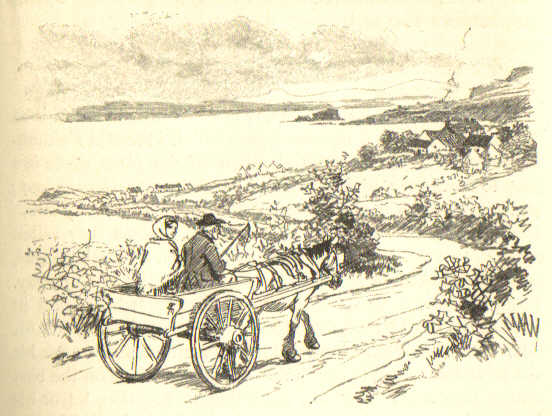 Rathlin Island from near Dunseverisk Castle 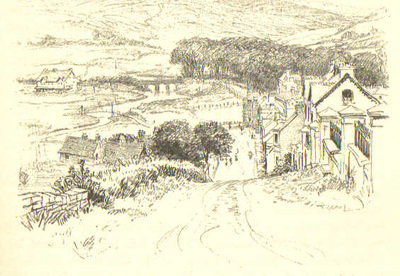 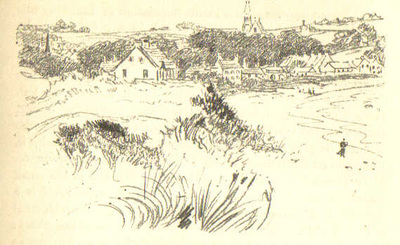 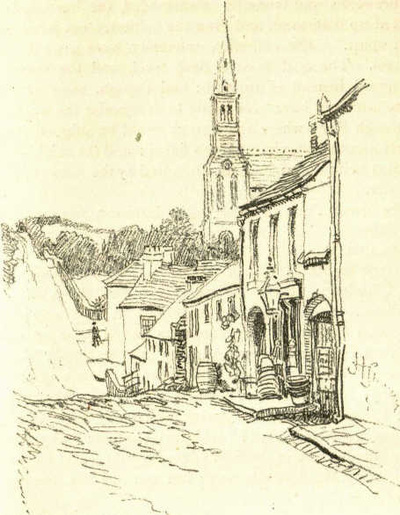 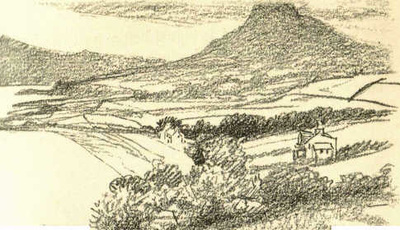 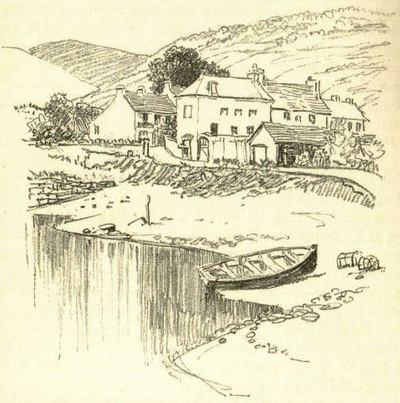 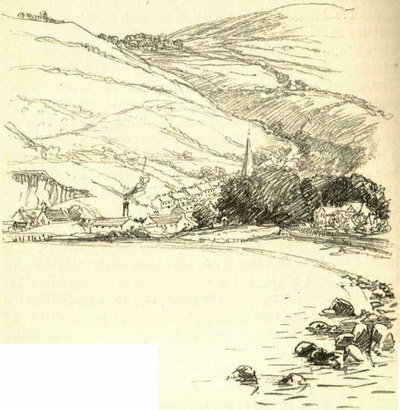 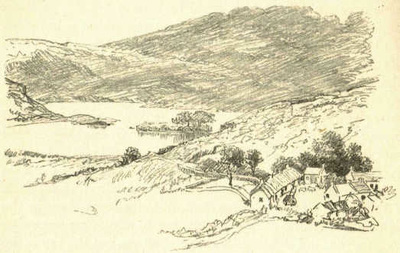 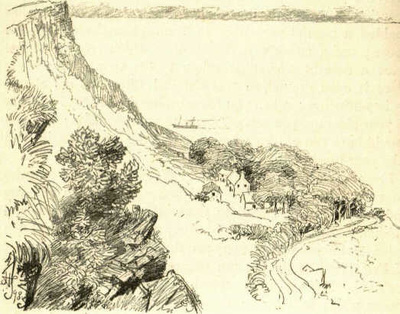