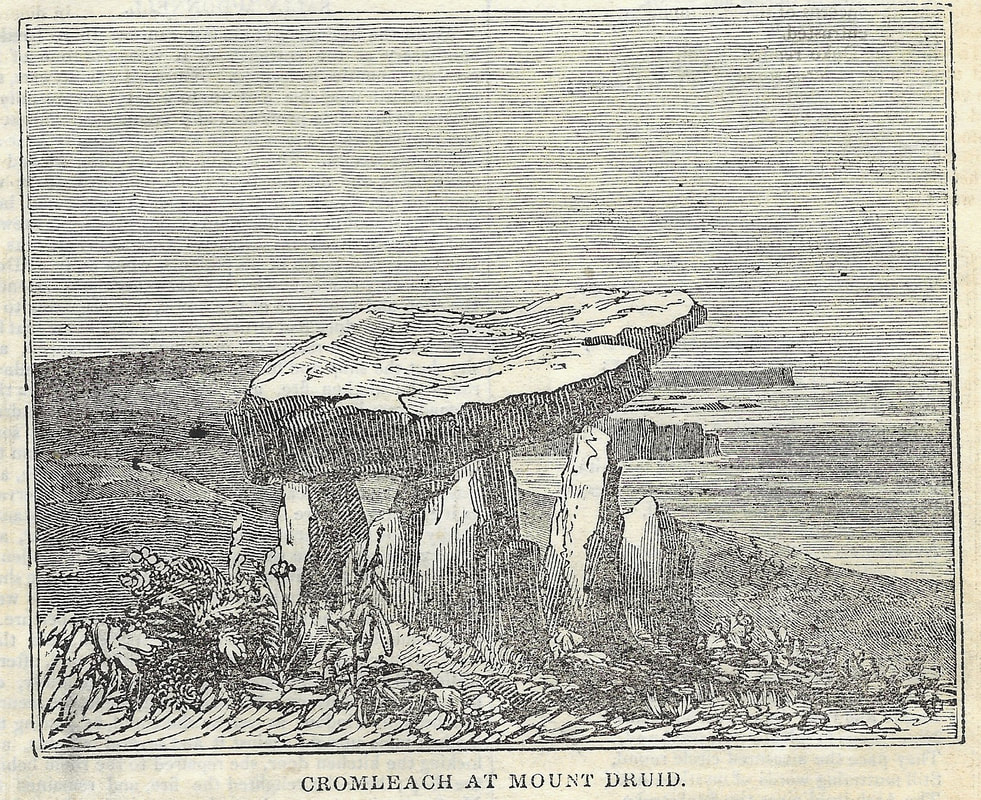 This memorial of the superstitious customs of our country, previous to the introduction of Christianity, stands on an eminence in the grounds of the Rev. Robert Trail, of Ballintoy, in the immediate vicinity of the Giants’ Causeway, in the county of Antrim.
This species of rude altar is very common in many parts of Ireland; it is called both in the Irish and old British language Crom liagh and Crom-leche, which signify in both a crooked stone, not from any crookedness, but from their inclining posture. They are supposed to have been so formed, in order to allow the blood of the victims slain upon them to run off freely. Mr. Rowland, in his Mona Antiqua, (page 47) conjectures that the word is derived from the Hebrew, Caerumluach, i. e., a devoted table or altar. Noah, after he left the ark, was to build an altar and offer up sacrifice on it to the Lord—Genesis viii. 20. And it is to be supposed that he built it of such coarse and rude stones as the mountains where the ark rested, afforded.— In Exodus xx. 25, they had a command not to build them of hewn stone, which seems to show that the British Cromleche, and the Irish Cromliagh are only the remaining effects of that ancient law and custom of not striking a tool upon the stones of their altars.— Deut, xxvii. 5. There rude altars are sustained in some places by rows of pillars, and sometimes by three or more large stones, something similar, though smaller, than the table or covering stone. The Cromliagh at Mount Druid appears to be of the latter class.
Of the Druidic system very little is actually known; and that little can he collected only from Greek and Latin authors. It was doubtless a system of profound mystery. Its priests, designated by the name of Druids, were forbidden by the inviolable rules of their institution to divulge to the laity any of their dogmas, or to commit to writing any part of their doctrines, which were composed in verses merely oral, and treasured in the mind by a tedious course of study. Their places of worship were lonely groves, awful to the vulgar by gloomy shades and religious consecration. For the oak tree they enjoined extraordinary reverence. On their altars they offered bloody sacrifices, and among the victims were frequently men, commonly such as were condemned for supposed or real crimes. Among them was said to be maintained a kind of hierarchy, terminating in Archdruid, President of all. To the vulgar they communicated some instructions of a moral nature; and, to inspire them with courage in battle, are said to have given them, in the doctrine of the metempsychosis, some faint idea of the soul’s immortality. It is to them the following allusion is made by Ossian;
“ There, mixed with the murmurs of waters, rose the voice of aged men, who called the forms of night to aid them in their war.”
Lucian also mentions them, thus :
“ Et vos barbariens rilus, morenique sinistrnm
Sacrorum, Druidae, positis riepetis ab armis,"
“Ye also, Druids, from relinquished arms
Returning, recommend your awful rites
Barbaric, and solemnities uncouth.”
Although in the following extract from a juvenile production1, published some years since, there is evidently an anachronism, still it has been considered as not giving a bad idea of the unholy rites which are supposed to have been practised by the early invaders of our country.
“ Soon from the shore the fleet is seen,
In warlike garb, and threatening mien,
Upon each galley’s deck appears
A triple row of shields and spears.
Closed are O'Connors peaceful halls,
Grates the portcullis as it falls,
Ten glowing summers have gone o’er
Since that hoarse shriek was heard before;
The pharos spreads the dread alarm,
And tells each neighbouring chief to arm.
From every fort and turret round
Is heard the bugle's echoing sound,
*****
On Mohir's cliffs the war-touch burns,
The signal every fort returns,
Roused by the gleagh2 from afar,
The neighbouring chieftains arm for war.
*****
Meanwhile the foe, with anxious care,
To their dread god a cromleach rear;
On three rude crags of stone is placed
A pond'rous flag, sloped to the east;
Round this is formed in mystic rite
A circle wide of unhewn stones,
While three old Druids, robed in white,
Place here and there some human bones;
Pieces of wood around are spread,
And lighted firebrands ready laid.
At distance, borne on truss of spears,
The destined victim now appears,
Bound hand and foot --his look serene
Speaks him a warrior to have been--
A captive now—the tenth I ween.
As he is slowly borne along
The Druids raise the funeral song--
Now on the sloping cromlech laid,
Beside him rests the murderous blade.
Nine times in solemn rite, profound,
They pace the measured circle round,
Still muttering words of mystic sound!
The Archdruid gives the fatal stroke,
The victim who nor once had spoke,
With his expiring, latest breath,
Defies in scorn the men of death--
While slowly now he bleeds and dies,
Loud yells from all the squadrons rise;
The Archdruid lifts his oaken wand,
The bending squadrons silent stand;
Again the song the Druid's raise,
To celebrate great Wodin’s praise: