We arrived here this evening about four o’clock after a very favorable voyage of six days and a quarter. The wind was in our favor until we reached the coast of Portugal off Lisbon when we were delayed a little by a contrary wind and the sea was very calm so that it was most fortunate on dearest Cha’s account; she was not sick but suffered somewhat from the closeness of the cabin; she was able however to get up on deck the last Thursday which has greatly refreshed her; today especially was so mild and fine that she was a long time on deck being first carefully muffled; her cough is not worse and her appetite seems much as when we left home; so I cannot say that she is stronger or better but that she has borne the journey well. The temperature is like that of summer at home at present and we purpose remaining at Gibralter or at San Rocque which is about four Irish miles from Gibraltar a little farther in the country for a month or so, according as I think it will suit dearest Cha’s health; but you will for the present direct to me Post Office, Gibraltar via Southampton until I write again. Dear Roddie has proved himself an excellent sailor and is in excellent health & spirits. Catherine suffered at first from seasickness but after a few days she got over it and is as of some use in dressing and taking care of dearest Cha’. I do think if she does not become homesick that she will be most useful to us both. We did not see land from Tuesday evening when we were off Holyhead in Wales till Saturday morning when we saw Cape Finistere in Spain. We then coasted along Porugal during Saturday & Sunday, passing on Sunday afternoon Cape St. Vincent , then we crossed to cape Trafalgar passing Cadiz in the distance today about eleven o’clock and soon got a view of Africa and the Atlas Mountain and soon about three o’clock today turned Tarifa Point & lighthouse where there is a small village and got a view of the Bay of Gibraltar which is a very fine one indeed and beautiful with fine mountains and headlands surrounding it and several interesting towns too; we were very fortunate in our companions. Mrs. Lowry and her two children whom I mentioned before. A rev. Mr. Grant of Stillorgan, his wife & five children for Leghorn, Colonel Ross an Englishman from near Liverpool, a most gentlemanly and agreeable man; a Mr. King, a young man travelling & going to visit Spain & Malaga and a Dr. O’Hagan a surgeon in the navy who is suffering from a delicate chest and is intending to visit Malaga. Captain Brownless of the vessel is a very pleasant agreeable man also. Altogether when they were permitted by seasickness to assemble they formed a pleasant party. The rule at Gibraltar is that the gun is fired at sunset and the gates of the town closed and no one allowed to go in or out of the town until morning. Consequently no one landed today even Mrs. Lowry who was so anxious to meet her husband. I have written a note to Dora which I send herewith and will you kindly post it, first putting it in an envelope. I hope dearest Mother that you have enjoyed as fine weather as we have had and that you and the dear children at home enjoyed good health and spirits since I last heard from you just before leaving Liverpool. I was glad to hear then that you had got rid of some of the labourers; I will only give you this advice that you will not let the men and horses engage in drawing home the turf or ploughing until they get the byres and yard settled properly; a few days of all hands would add so much I think to the tidiness of the place. I also would recommend that Burns should as soon as possible prepare a place in Boyle’s farm for making a manure heap and that the manure should be carted there as it is made and that neither the ploughing or drawing home of the turf should interfere with this. Magill ought to cover with scraws ricks in the moss which require it. I include in the arrangements about the byres the spreading of stones on the back road and around the yard & the _______  floors in the potato house, strawhouse & Kitty’s house also the cleaning out of the strawhouse and paving about the byres; as to whether the ploughing should be executed before or after the drawing home of the turf I leave this for you to decide but I think that if the weaher were favorable ploughing should be delayed as little as possible.
Thursday 13th November at Kings’ Arms Gibraltar. We landed in safety on Tuesday morning and found the hotels very full in consequence of General Garrett and his staff not having yet found quarters in the town. We have got tolerable quarters but not such as to induce us to remain long here and we purpose going to Malaga on the 20th by steamer so you will please direct to me at Post Office, Malaga, Spain, and the postage of letters is 10d for under a quarter on an ounce and 15d for half an ounce and write via France; it is expected that the postage will be reduced to 6d and I am not sure whether it is so already or not; Dearest Cha’ continues much the same. It is too soon to expect much change; Roddie is quite well but has a heat out on him, I think from living too high. This is a very remarkable place and I will try to give you some account of it in my next. With fondest love to you & the dear children from us all.

Believe me
Yours very affectionately 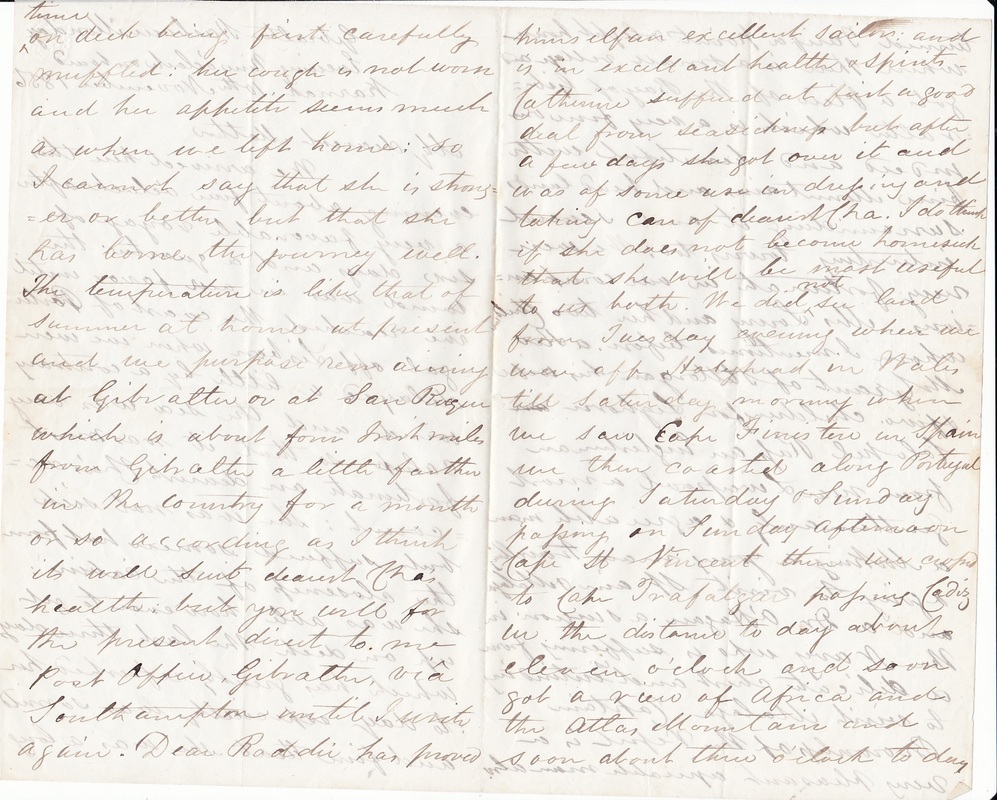 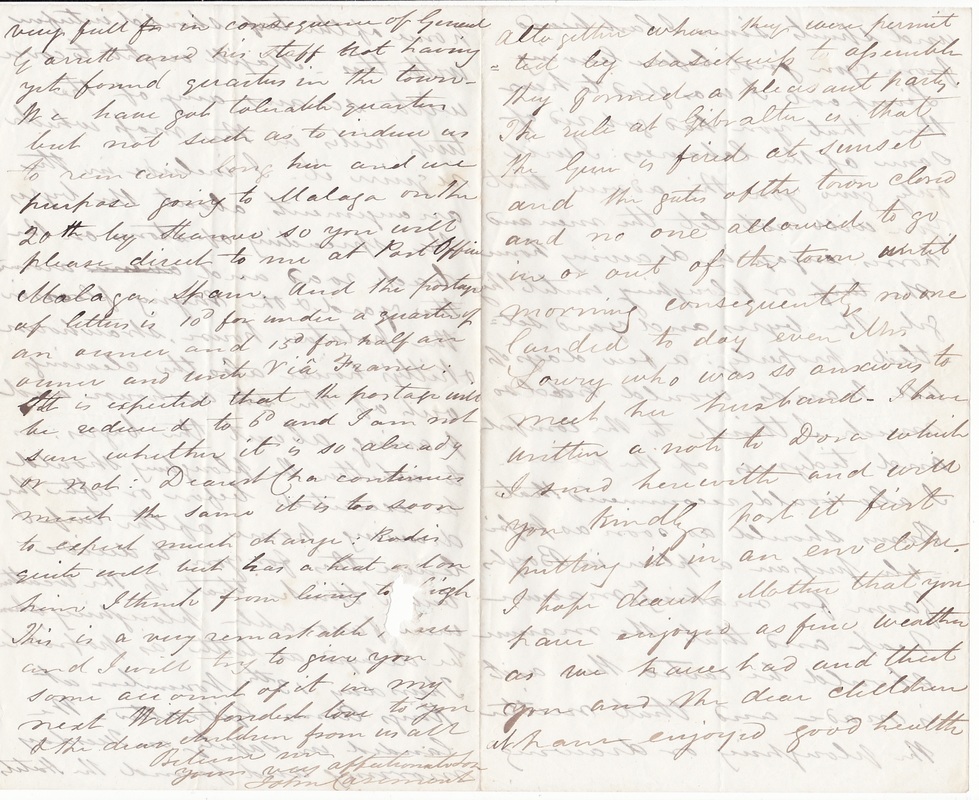 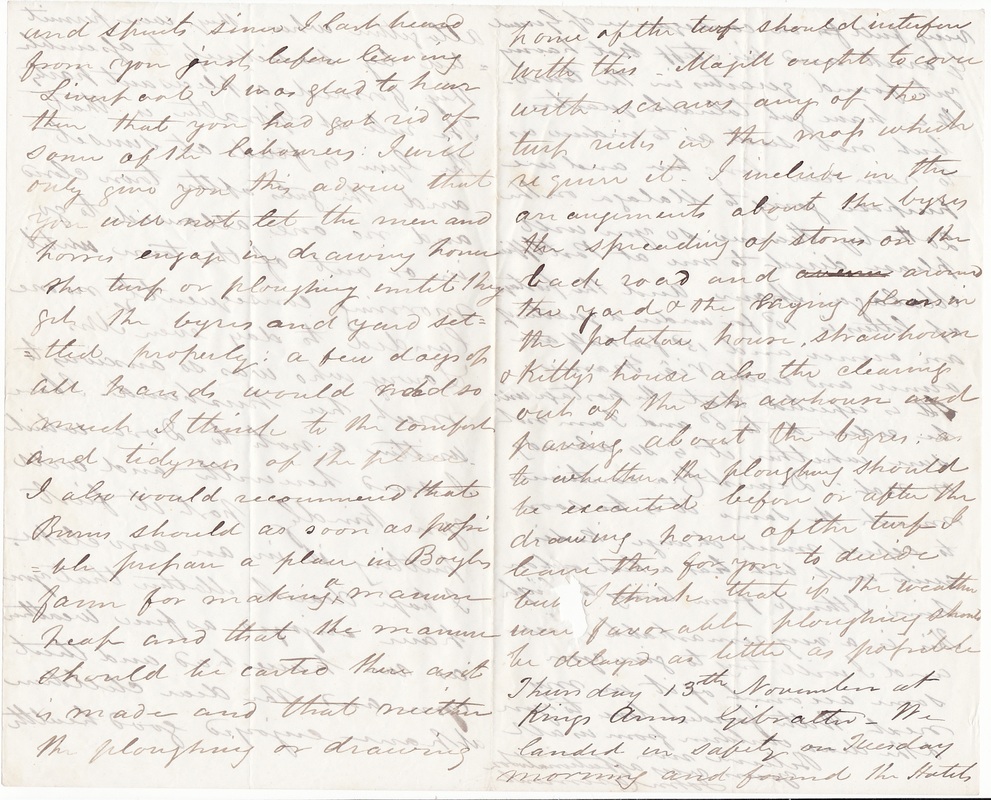