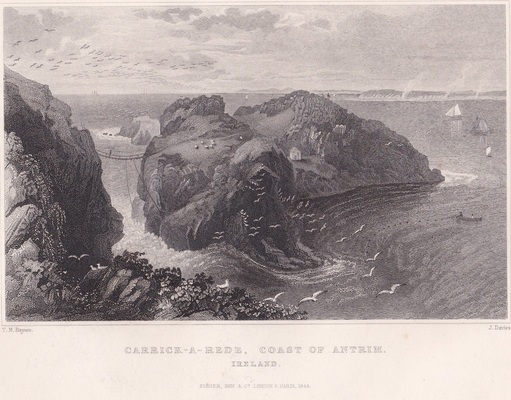 Dream not now of safe return,
Thoughts of doubt and danger spurn,
Plant thy foot and fix thine eye,
Like an arrow, forward fly.

ONE of the most interesting natural curiosities in this extensive basaltic region, is the little pyramidal islet of Carrick-a-Rede, "the rock in the road." The appropriate epithet is derived from the interruption which this mass of basalt occasions to the salmon ranging along the coast in quest of their original haunt. Every form which this singular description of rock assumes is to be found in the composition of this island; coarse greenstone, unformed trap, crystallized basalt, the latter prismatical or columnar in arrangement and inclined, perpendicular and horizontal. Before discoveries in geology had found an explanation for the artificial appearance of prismatic basalt, before the diffusion of general information had made society acquainted with the presence of a similar mineral production in many lands, the colonnades in the vicinity of the Giant's Causeway in Ireland, and of Staffa in Scotland, were appanages of fable and fiction and story, rather than subjects of real knowledge. - Science having removed the veil of ignorance and wonder from our eyes, it only remains to describe the local peculiarities of this little insular curiosity.
Elevated upwards of three hundred feet, the level also of the nearest main land, sterility keeps uncontrolled possession of the surface; a few obstinate blades of grass raise their wiry forms in the fissures of the rock, only to render the nudity around more marked, while the majestic swell of the ocean, the almost uninterrupted prevalence of boisterous weather, and the eternal screaming of the sea-fowl that hover overhead, or sweep rapidly round the island, present a picture of remoteness from the busy haunts of man, of a melancholy meaning. Here too are not wanting horrors to enhance the effect of sublimity, for between the island and the shore is a dark deep gulf, where the surges beat and the billows roar, and the spray is in eternal suspense; sometimes the rays of light descending, disclose the frightful abyss; at others, leaving so much to imagination, they produce an effect still more terrifying; and it is across this gulf of frightful depth that the proprietor of the valuable salmon-fishery has thrown a rope suspension-bridge, for the accommodation of his fishermen during the season.
Like the geological structure of the rock itself there was a time when the bridge excited curiosity, and when its transit was performed, and remembered as a performance evincing the most manly courage; but the repute of both has faded, science has dissipated that astonishment which the scrupulous and accurate formation of columnar basalt once excited, and suspension-bridges have become universally adopted, wherever centering is found difficult, as in gulfs and gullies, or where the navigation of a river does not admit of substantial piers. To those rude efforts, the Jhoola or rope bridge, the sanga or single trunk, the grass bridge, the bridge of hides, in Oriental countries, as well as to such homely specimens as this at Carrick-a-Rede, are engineers of to-day indebted for their iron chain-bridges of suspension. By such perilous passages journeys from chiefdom to chiefdom are performed in the East, cattle transported in South America, and inter-course in many mountainous countries maintained; and it was by taking advantage of a Jhoola, near which a band of free-booters were carousing, that Timour the Tartar achieved one of the boldest acts of personal bravery recorded in military history.
The swinging bridge between the Antrim coast and the rocky islet in the Illustration, consists of two parallel ropes secured to rings let into the rock on each side of the yawning chasm, with crossing cords, on which, as on the rounds of a ladder, planks are loosely laid. There is undoubtedly little attention here paid to security; the whole structure swings with every breeze, the planks are not even tied to the cross cords, and a rail or a hand-guide would rather increase the danger to a passenger, from the peril of reaction. Those who are employed in the conduct of the fishery pass rapidly and safely over, much aided in the accomplishment by the stability which a basket-load of salmon on the back contributes; but, to tempt the deity of Carrick-a-Rede, either for the mere gratification of curiosity, or of being able to claim an useless victory, will scarcely admit of pardon or palliation.
When the season closes, the Clerk retires from his island-hut, having previously removed the planks and ropes of which his temporary bridge was formed, and stored them for the winter; and from this period the rock is inaccessible, save at even a greater risk than before an approach to its dangerous coast by water.