Last night I received Margaret’s note with its enclosures. I cannot say I felt much surprised by its contents. Should M.C. take the benefit of the Insolvent Act, as Mr. Crosee threatens I will not release him from his liability under his bond, should he ever become possessed of any property, but I doubt much if he could take the benefit of the act without being looked on as degraded for ever as a Church Clergyman & of course giving up all hopes of promotion, which his friends will not allow him to do if it can be avoided. I believe your only plan will be to allow it to remain over for some time, merely letting Margaret drop him a few lines every two or three months, by way of jogging his memory. As to expending money taking law proceedings, it would be so much more thrown away, till something turns up in his favour. If the old Dean should happen to die soon, you would yet get all.

I am sorry to say I cannot say when I can find time to pay you the long threatened visit.  ??? are about making some changes in the Linen Hall which I expect will allow me a little more leisure after some time, but it must yet be some months before our new hands are fairly set a going & till that is the case I expect to be even more confined than less. Margaret ought to have kept back the “parting with the horse at the end of the month”, as a reason for my going soon, for, just as sure as I go to see you I find you without a horse and car or carriage. I will lift up my voice most loudly for your getting one. After having horse & car for so many years, what can now induce you to give it up? When you have, if anything, more occasion for such a luxury! I can’t see any good reason, unless you intend to launch a four wheeled instead of a two wheeled carriage, two horses instead of one, & a coachman instead of a boy. However, we could talk over all them matters if you would only come here & stay with us for some time. As soon as the ???? are over the house will be nearly empty & I think you would find a few weeks pass over pleasantly. In the mean time I would not sell the horse unless he be a bad one, & then only with the intention of buying another. Tell Dr. Hollywood I expected to have seen him here last Saturday night or Sunday morning. I would be glad to see him as soon as he likes. I hope Mrs. H.’s hand is quite well & with kind remembrance to all with you, ?????????? me always,

I enclose the three notes.
Margaret should put dates to all, not forgetting the year. 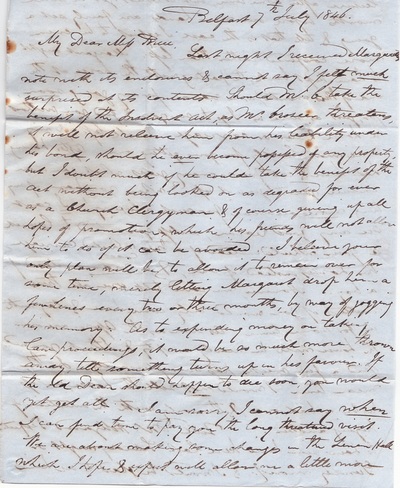 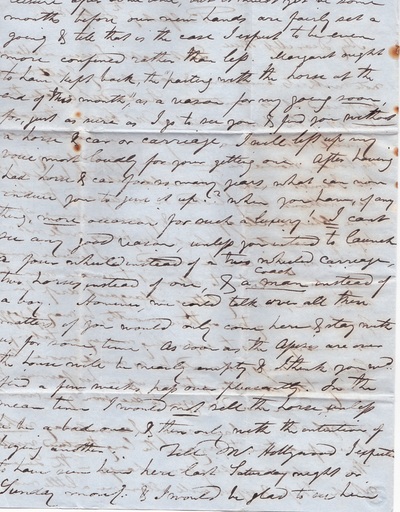 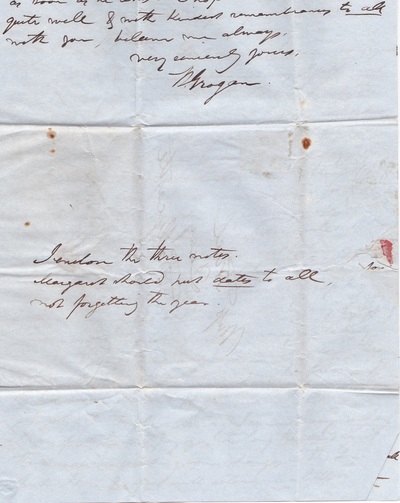 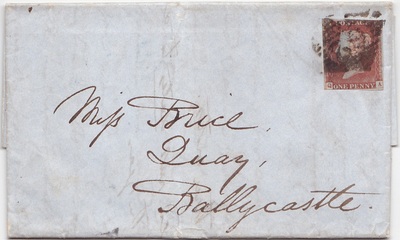